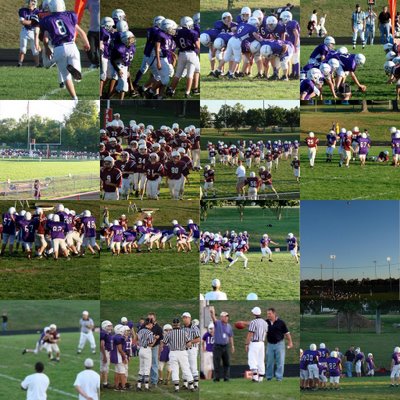 we lost 22-8..however...Barrett did score the only touchdown...and 2 point conversion...and with only a minute to go in the 4th quarter...it was 16-8...and Hickory picked up a Cherokee fumble on the far sideline...and ran it back for a potential score tieing touchdown... after the signal of a touchdown...the near side (or should I say nearsighted) referee called the play dead...no fumble...and the play was dead (he said)...even though there was NO WHISTLE!...he overruled the other officials, on a play on thier sideline was not called.....even though he was 40 yds away...and the field is crowned so much...you can only see the boys from the waist up across the field.

At any rate...after a 7 minute delay...and our coach having to call time out...so that the officials could remember that Cherokee should be on 4th down...not first..and there should be another 30 seconds added back on the clock...Cherokee scored on the next play...moving the game out of reach.

Still a valiant effort on the part of the 35 members of the Spartan 7th Grade.

I just like this picture...for a number of reasons... 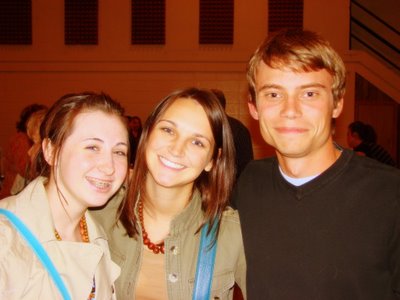 Anyone want to hazzard a guess as to one or several of them...???

Jonny is the King of the Mountain...No doubt! 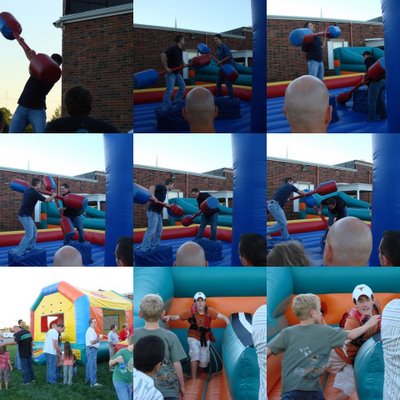 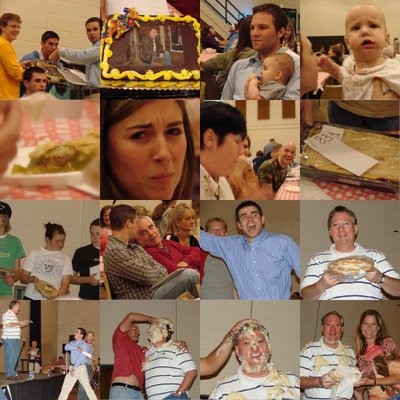 Special thanks to Gary and Lisa Wilson...for putting together the "best Pie Auction ...Evvvver...and a great 2006 Missions Conference.
5 comments:

Email ThisBlogThis!Share to TwitterShare to FacebookShare to Pinterest
Labels: HSBC does not endorse this blog

Hickory vs Pershing...one play away... 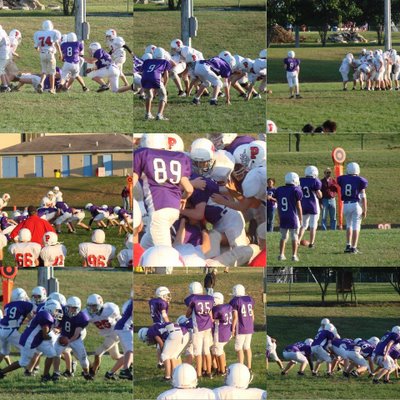 Although Barrett Scored the only Hickory touchdown...and Sacked the Pershing QB twice...Hickory lost the game 6-8 on a last second 74yd touchdown pass (the only completed pass) from Pershing. Hickory's defense was tough...never allowing Pershing to get a first down...but Pershing was tough as well...stopping Hickory at almost every turn...Barrett had a few good carries...and lead the team with touches... He felt a little sore the next day...so there was definately some hitting going on out there. This will serve to get them fired up for next weeks game...sure to be a good one.

OK...so this is not really that funny anymore.

Yes...it is true...i had a fall last sunday night. ..(Thanks for allowing my swelling to go down before you asked about it Crystal) All of you people in the church auditorium after the service sunday night...and there was that terrible noise..sounding like a filing cabinet was pushed down the stairs...well...yes...that was me.
I missed a step...#2 or so...and had my hands full of some stuff that I was carrying...and well. It looked much like this video.

Thanks for all the kind cards and notes...and flowers...but I am back to (almost) normal...and the swelling is almost all gone, and i'm sure the bruising will fade any day now.

So...I have a couple of words of wisdom for you. One...be careful on the steps...and second...always carry your camera (Rachel) and you could have the actual pictures of this event...
2 comments:

Hickory vs Carver...Hickory wins 8 to zip. 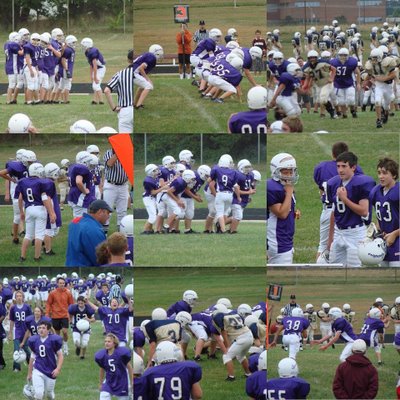 Way to go Barrett...It was a good game...and I can't wait till next week! 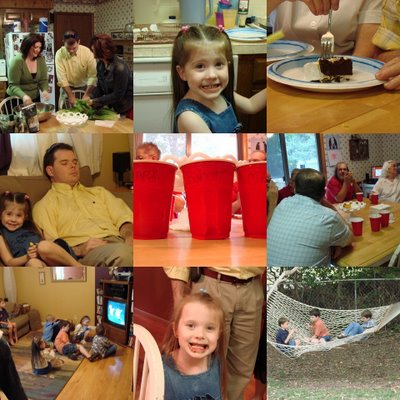 Thanks to everyone for coming out to the family dinner...and especially to my wife for putting it all together...thanks for everything...it was great! 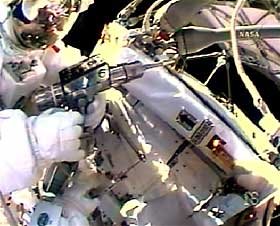 OK...so the last few days I have been giving Cindy a hard time about an incident that happened at her new job. She had to go update a real estate sign with a "Sold" header or something...anyway. It was in Fair Grove...and so she drove out there...as her first offical sign excursion. Well...she ended up dropping the bolt in the tall grass...and could not find it. ...after looking for several several minutes...she could still not find it. And of course...she had not brought an extra one...so she had to drive back to the office and get another one.

Now I had really been making fun of her for this...untill I heard about this story on the news today. http://www.signonsandiego.com/news/science/20060913-0703-spaceshuttle.html
Apparently the Space Shuttle crew is in space on extended space walks...attaching a $329Million dollar portion of the space station...to the rest of the space station that is up there...and they have dropped two bolts!...and the best part is...they don't have any extras...

Email ThisBlogThis!Share to TwitterShare to FacebookShare to Pinterest
Labels: Stuff I had to Apologize for

Strafford High School Class of '86 - 20yr Get Together 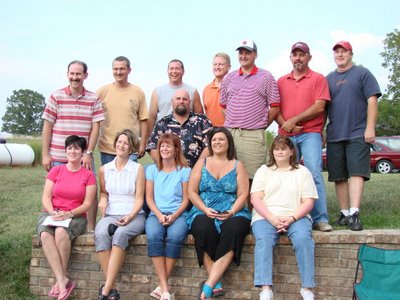 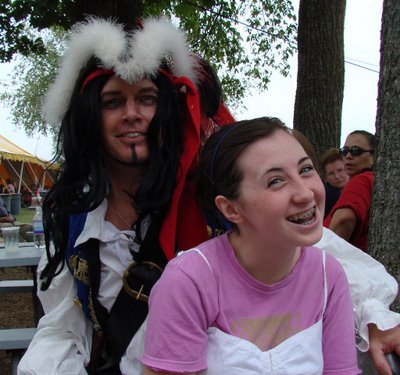 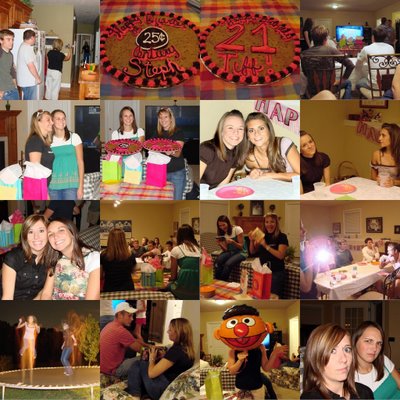 Guess who the person is befind the Ernie head!

Barrett as 7th Grade QB and MLB for Hickory Scrimmage 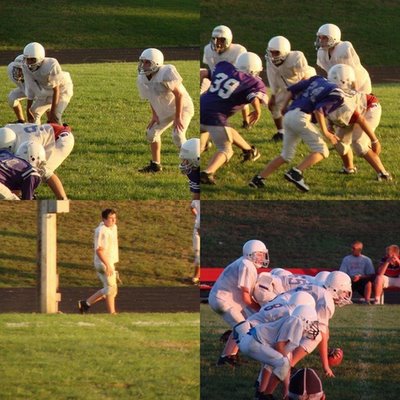 Even though it was only a "gatorade" scrimmage...they looked great on the field.

Defensive highlights...He made the first two tackles of the game...chased down an oposite field sweep, from befind saving a touchdown...and had at least 5 tackles in the defensive 1st half.

Offensive highlights...He lead his team with poise and confidence...including several perfect wide right sweep pitches, right to the RB's hip...once tucking up the option & sprinting untouched 40yd for a touchdown...and had a 20yd qb sneak.

Come on out and see Barrett battle it out on the gridiron each Tuesday* night at 5:30.

I can't wait for the first game:

DMP is blowin out the walls...again. 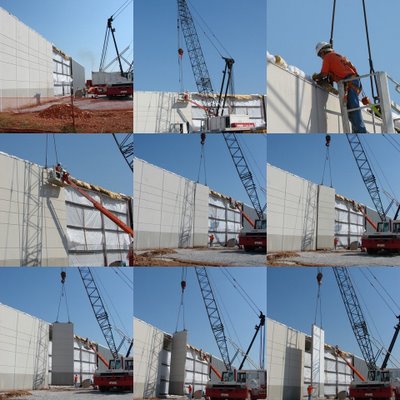 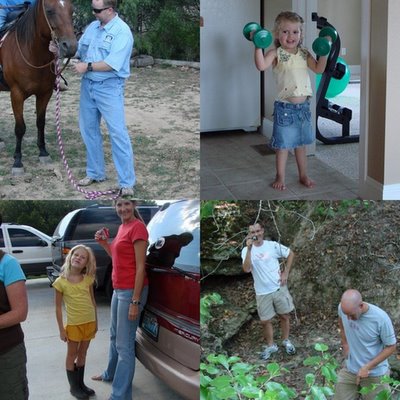 Tommy D...wins...with Laura D...getting a full 25%...of the take.
of course he was ineligible for the contest...because HE WAS IN the contest...but that not withstanding...congrats...your prize should be headed...over your way soon. 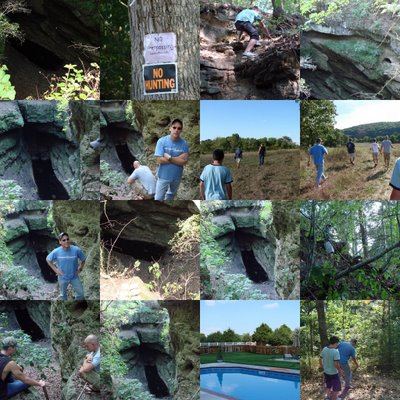 Ok...so were sittin around the Roy expanse...and were talkin about abnormalities that we all have on our land. (Like I have this spot in my back yard...where I just can't get grass to grow.) I ask Greg...if my house is covered by Insurance...if a 75 foot Sink Hole swallows up my house...like the one did in Nixa watch the video of it happening here...

And Lotz...says...hey. There is this place called the "devils den" not to far from here...we need to go there sometime. Then we sit around a few more minutes watching the 1993 Miami vs. Florida State game...(that yielded 52 NFL players...mind you) and we say...Hey. Lets go do it today...No time like the present, lets go face the evil or whatever might befall us by going to a secret location, with a 100' drop off into what is called the Devils Den...where is is perported that a farmer threw in a dye filled Hay Bale...and three weeks later it turned up in Table Rock Lake.
There is no better time than the present...we surmise...in the memory of Steve Irwin we saddle up and head out.
well actually...First we go ask our wives...to make sure that it is "OK" with them if we go face this unknown behometh of a crag ripped deep into the earth's crust...next we pour in a little bit more "Liquid Courage" better known at Pina Colada smoothies...(non-alcoholic of course...only because Betty forgot to bring the Rum) ...I digress.

Lotz calls his "Contact" and arranges a rendevous at a certain point on "bobcat road"...where...after a short exchange...we follow his unmarked (camoflagged) vehicle...into the undisclosed location. At a certain point...he parks his vehicle...and comes and gets into ours. "OK...fellas...this is as far as my truck will go...were going to have to take your four wheel drive unit in the rest of the way"...Greg locks in the hubs...and we head out. It is at this point, that our "contact" tells us that ..."we cannott be seen going in to this private property..." and we might have about a 50yd army crawl ahead of us. (NO Problem...half of our group of ruffians are wearing flip-flops, the other half cowboy boots). I guess I really have an ecclectic group of friends...I digress

After a brief amount of work to cover the vehicle...to throw off any would be follower...from our trail (we parked it facing the opposite direction...and across the road from our intended target, out in the middle of what I can only describe as something a-kin to Area 51) We head out on foot. First, we scale an 8' fence...clearly labelled as Private Property...and begin scurring across the ground, hunched over...and in a zig-zag pattern...like we were being fired upon by machine gun nests on the high ground to our left.

Our "contact" told us that if we are caught...to "scatter...they can't catch is all". He also said..."no direct pictures of my face." looking straight at me....My reputation has caught up with me.

As we cross the last razor-wire fence...he informs us..."ok. It is a felony now boys...this is US Govt land...seized because of what we are about to creep up upon..and look down in." Also because so many human remains kept turning up on this here hole...

As we hiked down to the edge of the crevace...I could not help but wonder if this was going to end up like that Jr. High cliff climbing excercise that Steve Boschen and Duane Hoffman led us on...where Mark Schaeffer...and I helped a young man (that was larger than both of us combined) to shinny along a cliff ledge about 8 slippery inches wide...while he dug into the shear rock cliff with his fingernails...to keep from falling to the icy depths of the James River, 40 feet below. This is also the young man...that graces the front of my Frig...after Jeff and Deb sent his photo to us...for Christmas one year...Crack Kills...I digress.

Although it is hard to see in the photos....this is quite a little hole in the ground.

Which has a rich and varied history...that is even is sparking controversy today...

My report...is simply this. Big hole in the ground, yep...it's there....is it the "Devils Den"...obviously not...according to my wife the "Devils Den" is Hooters...and this was no where near any restaurants of ANY kind.
On a scale from 1-10 of lifetime capers I have been a part of...i'll give it a 7.83...not nearly as good as the times that Rog and I were in Vegas...and...I digress.

PS. That is not the "Devils Pool" pictured there either...it is simply Greg's pool...everyone knows the "Devils Pool" is down south of Branson...at Big Cedar...interestingly enough...it is a restaurant too. ...weird! Next...were going to check out that weird non-Grassy spot in my back yard...
7 comments: 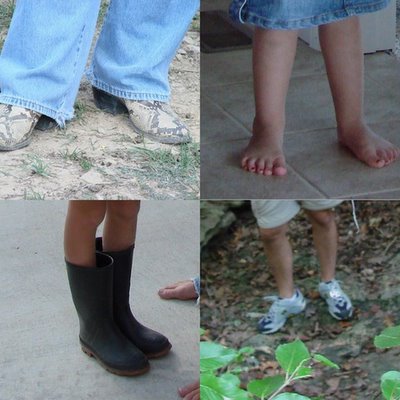 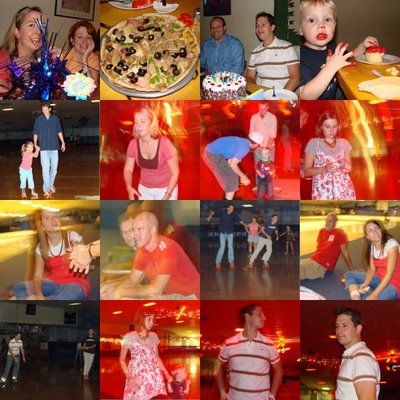 Name that Pizza...and Guess how old Jonny is...

Email ThisBlogThis!Share to TwitterShare to FacebookShare to Pinterest
Labels: Party's we WERE invited to
Newer Posts Older Posts Home
Subscribe to: Posts (Atom)